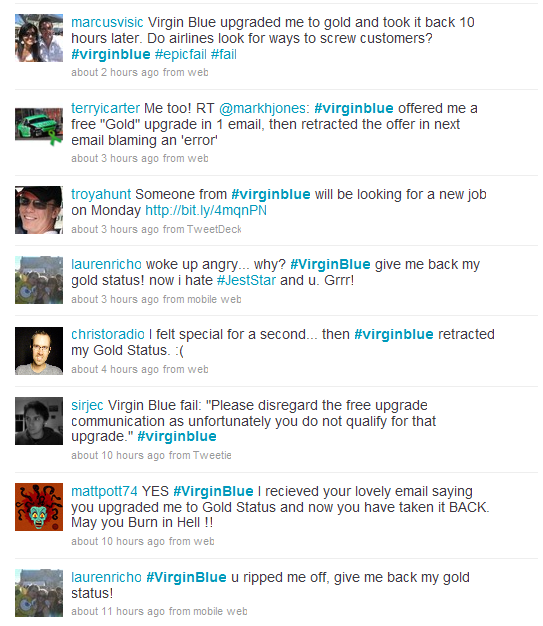 Last night a person (yes a real human) made several mistakes. They made an error and then the attempts to manage it weren’t so great and things didn’t exactly resolve themselves as they could have.
Ever happened to you? In your working life, have you ever made one of those mistakes that sent chills down your spine? I know I have. I once type “ rm *.* /” (or to that effect it was a long while ago) on a Linux web server before going to make a coffee to come back and find an empty machine.

You know that sometimes it happens. We are people not angels or robots that can operate continuously without error. In fact, they cannot either.

So why is it that the tools of Social Media make tools out of people?

Yes, companies, people and organisations of any sort can and should be open to criticism and correction of poor behaviour. I agree totally. However I don’t agree that Crowd Spanking of everyone that does something wrong is effective nor necessary.

The Open tools of communication should make for better communication. Unfortunately, last night that didn’t happen. Before the company involved had a remote chance to respond, the crowds were out in force spanking hard and frequently. There was some sanity amongst the masses thankfully.

If you spanked your child every time they made a mistake (maybe you do which is much worse), or every employee that made a mistake or yourself ... you get my point.

There needs to be thought first action later.

I am all for consumer advocacy and for consumer rights but I am also an advocate for common sense and understanding and human errors. If we are too afraid to make mistakes, we will never take risks!

What has been forgotten is that someone a person or small team of people are in a whole load of pain right now. Any of them your friends or family? Any of them maybe might lose their livelihood, or their credibility. How would you feel if it was you or yours?

Step back from the computer.  Take a deep breath.

Remember before you wade into the groundswell of consumer hysteria to apply some balance. Social Media Tools are not all one-way traffic. In addition, your rights are meant to be your rights. First, think about what your rights are and then be honest as well.

Really how many people just purchased a flight within 1 hour of ‘going gold’ for the extra benefit of access to the lounge, quick check in and extra luggage? I am a lounge member and nice as it is, it isn’t that flash, better than outside yes, but not worth a desperate purchase to get into. Maybe it tipped someone over the point of purchase, but in such a short space of time that would be a rarity.

The truth is people have now decided to seek out the freebies everywhere, jump on bandwagons of discontent without having any reason to.

Those that chose to wade in from overseas, or those that were not even part of it, who have never flown with them, really should stop being ambulance chasers. Stop the crowd spanking.

If you decided this fiasco was such a mess you would now fly Jetstar well good on you, you have consumer choice. I have flown Jetstar and I will happily stay with Virgin Blue. They treat me well every time I travel, and I travel a lot! I was actually pretty close to getting Gold, and do I feel slighted? No. I DID NOT deserve it, I HAD NOT earned it.

In fact while I KNOW Virgin Blue aren’t perfect I also know how well they treat me well, and that they have done more than Qantas ever did for lowering the cost of airfares in Australia. The fact so many of the crowd spankers have actually flown regularly is because of what Virgin Blue has done for Australian flying. It used to cost 3-4 times as much before and it was not that long ago!

Add some balance to your thinking and demands. Do you really want to force a business when they make such a mistake that you would be happy to force them to honour something that may well cripple a business? Add some perspective. This is not a corporation that has exposed their staff and customer to asbestos and are denying compensation. It is an upgrade people!

So what could have Virgin Blue done better?

Before all the Social Media Gurus come up with the 10 things that Virgin Blue could have done better blog posts think through how businesses and people at work live.

Under the guns of public scrutiny and the pressure of the war of errors, the team of people involved probably thought they were doing an okay job, but one can only assume a lot of yelling was going on behind closed doors and there were a bunch of people hurting about it. Most people I know take their jobs pretty seriously (I have 15 of them). They would have been feeling very uptight and stressed about it.

Maybe they didn’t think it was life threatening, and who can blame them. It wasn’t.

However, the ideal lists of strategies to employ written by the gurus that have rarely ever had to deal live with these sorts of corporate problems will flow and be digested.

Step back from your keyboards Crowd spankers. You and I know that despite your howls and cries of bad play you will be on the next cheap flight because you aren’t a loyal customer that necessarily has a voice, you like me often choose purely on price. You will be back. They know it and we know it.

If you want to howl with rage then find something worth howling about. There are still plenty of real world travesties going on.

Well that is what Ireckon!

16.11.09 > Several Blogs with interesting comments have appeared over the weekend.

Mumbrella has a post about it which has gathered a lot of comment: Virgin Blue's gold class Velocity email blunder